I’m pleased to announce that a new episode of the podcast is coming soon and, to keep you guys busy a bit, today we have a guest post from a partner site – Learning to Know Russian. Enjoy! 🙂

How much do I tip at a restaurant? Where can I find something affordable to eat? What’s the deal with vodka? We’ve got you covered on food and drink in Russia.

Hey, it’s Denis from Learning To Know Russian. Thank you for joining us! We’re excited to have you along!

Of course, it’s always fascinating to learn about food traditions in new places. But don’t forget that еда (food) during a trip is more than just exotic entertainment. You need to know how to stay on budget and avoid getting sick!

As you might expect, food and drink are a huge part of Russian culture. We’ve got a lot to talk about: Russian traditions for going out to eat as well as hosting parties at home…The different types of restaurants and cuisine you will find…What to expect when eating out with friends and how much to tip…Russia’s obsession with lunch…buying groceries at the store…avoiding food poisoning…and how to drink vodka the right way!

Do you want to know where locals eat in Russia? They eat at home, of course! For many Russians, going to a ресторан (restaurant) or кафе (cafe) is a rare occasion. You go to a restaurant or cafe to celebrate a special event or holiday. Some people never go out to eat, preferring to celebrate at home. They might do it to save money or simply because they believe the food at home tastes better. 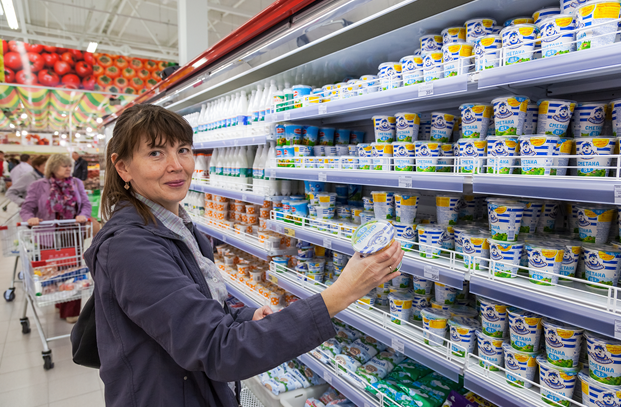 Author’s remark: I’m really happy that my family always celebrated special events at home, instead of going to a restaurant. On the big day, several families would crowd into our apartment. We’d cook food for several days beforehand, and the table would nearly collapse under the weight of the food! Afterwards, there would be enough food left over to last several days. No restaurant can compare with that type of adventure! In any case, for most Russians eating out every week is generally an exception. 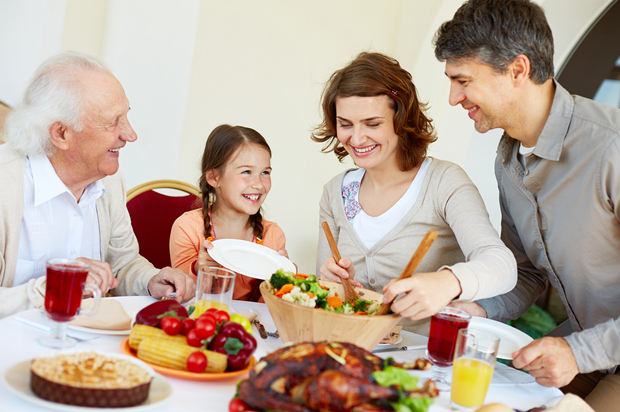 A ресторан is usually a more expensive place and a кафе is a bit simpler and cheaper. You can try traditional Russian, Ukrainian, and Caucasian кухня (cuisine) in specialty рестораны, but don’t forget that unusual food can be hard on the body. 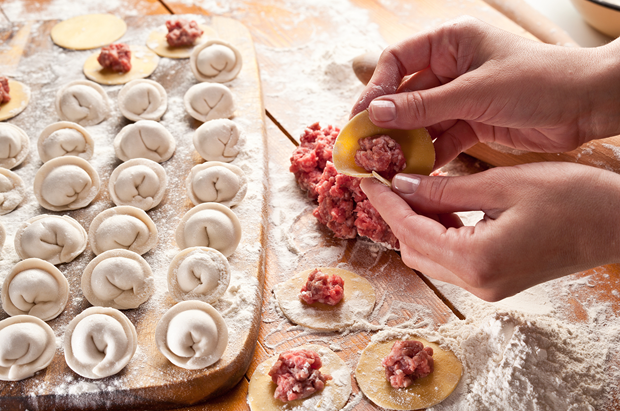 The offline version of the podcast includes the episodes in MP3 and PDF formats. The PDF files are available in two versions: for desktop and mobile devices.
Get offline version

Always check the цены (prices) in the меню (menu), because sometimes it can be extremely дорого (expensive) to eat out at a good restaurant, especially in Moscow. In order to save on your daily meals, look for a столовая (canteen). A столовая is an affordable cafe provided by many organizations where staff and visitors can enjoy a cheap обед (lunch). It’s easy to recognize a столовая because of its self-service (you pick up your food on a tray and pay at the cash register). These days, however, there are also a lot of budget кафе with self-service.

You can ask for a bill in a restaurant by using the phrase: счет, пожалуйста (the bill, please).

Of course, there are other phrases, too: рассчитайте нас, посчитайте нас (ring us up). If you’re being served by a woman, don’t forget to address her as “девушка” (young woman). Девушка, рассчитайте нас! (Young woman, ring us up!)

What do you do if it’s loud and the waiter is at the other end of the room? How do you communicate without words? Here’s what I would do: pretend like you’re writing something on your open palm. The waiter should understand and nod.

If you want, you can leave a чаевые (tip), though this is not a must. There’s no fixed, universally accepted standard for leaving tips. It’s more an extra thank-you for excellent service. Did you think the service and food could have been better? Then don’t leave a tip! Let them learn to provide first-class service first.

There’s an old legend in Russia that men always pay for women in restaurants. This information is a bit outdated. The man is only expected to pay the счет (bill) when it’s a romantic date.

Author’s remark: You should also know that friends don’t usually ask for separate bills when eating out. Usually someone asks for the bill, then everyone figures how much they ate and drank and pays their part. I think it’s a fascinating part of a friends’ night out. You get to see how everyone treats money. For foreigners, this is an important test as your friends will definitely offer to pay for you when the bill comes. It’s respectful to refuse, but don’t be too insistent.

Any Russian mother will tell her child that they must eat the первое (first course) every single day. They’re convinced that eating food without liquids or something warm (soup and hot dishes) is very bad for you. I’ve often noticed the look of shock on Russian mothers’ faces in Australia when they see children eating cold sandwiches for lunch, without any soup, cutlets or compote!

In a ресторан, кафе, and столовая you should not forget about being careful, since отравление (food poisoning) is quite common. You run the biggest risk of отравление at Japanese-style restaurants and in small street booths, for example, the stands with хот-доги (hot dogs). Фаст-фуд (fast food) in Russia is not just unhealthy for you, it can also be dangerous!

If you want to and can cook for yourself, you’ll find продукты (groceries) in any food store that are very similar to what’s sold in Europe. For Americans and Australians, some продукты will probably seem exotic.

For example, sour milk products are popular (kefir, curdled milk), as well as something similar to cottage cheese. Of course, we can’t forget гречка (buckwheat), a food that only Russians seem to appreciate!

The most common stereotype related to Russia has to do with алкоголь (alcohol). But not that many people know that the culture of алкоголь in Russia is very different from that in the West. Drinking водка (vodka) without a закуска (snack), that is, without a lot of food, is a sign of low social status and even alcoholism.

Do not do as some locals do: drinking водка and even пиво (beer) in the streets and on public transport is prohibited by law.

Author’s remark: Drinking beer on public transport and in public spaces really has become a bad habit for many. People even joke that in the Moscow metro half of the passengers read, while the rest drink beer. Although, some do both at the same time.

Recently, drinking beer in public spaces was outlawed. A policeman could come up and say: “Ваши документы!” (Your documents!). Speaking of which, that’s a good reminder: you always need to carry your passport with you!

If a stranger asks you to выпить (drink alcohol), do not assume this is innocent Russian hospitality. The person could be a criminal. The correct answer is: “Я не пью” (I don’t drink).

So, what have we learned about food and drink in Russia?

Our advice for those who are learning or plan to learn Russian:

Russian words don’t look too complicated. For example, хот-дог is an excellent and easy-to-understand word. But I will remind you of the “terrifying” part of the Russian language: падежи (cases)! I have a хот-дог. But I don’t have a хот-дога. You’re thinking about a хот-доге. You threw a хот-догом at me….

Are you going to memorize tables and thousands of endings? Do you need to learn tons of illogical rules?
Please, you don’t need to do that. I know that many Russian language textbooks start with noun cases. But it’s impossible to just memorize. Besides, Russians have never learned that way.

There’s one answer for you: exposure. You need to be exposed to words in various forms and phrases until using those words comes naturally. Of course, you need to do this the right way with the help of a specific system.

Are you going to memorize tables and thousands of endings? Do you need to learn tons of illogical rules?

Please, you don’t need to do that. I know that many Russian language textbooks start with noun cases. But it’s impossible to just memorize. Besides, Russians have never learned that way.

There’s one answer for you: exposure. You need to be exposed to words in various forms and phrases until using those words comes naturally. Of course, you need to do this the right way with the help of a specific system.

Thanks for reading! This was brought to you by Denis from Learning To Know Russian. Stay on the lookout for more helpful info. Learn Russian. Understand Russians.

If you appreciate our work, please consider donating today.
We need the support of readers just like you to continue our work.
Choose an amount for a monthly pledge or a single donation below.
From all our team, thank you for your support.